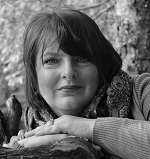 Haunted Heart, the writer’s first novel, was a natural progression for Laverne Stewart, who has been putting thoughts to paper as long as she’s  been able to hold a pencil. She knew in high school that a writing career was her life’s ambition.

Laverne Stewart is also a 30-year journalism veteran. After a year as a radio news anchor she made the move to television. She spent 11 years with CTV as a news magazine investigative reporter before she made the leap to print journalism. She's an award-winning journalist and author. This is her third book.

When she’s not writing about the gritty reality of life in this world she is making contact with those in the afterlife. Her first book, Angels and the Afterlife, opened the door to Healing After Homicide,  and provided inspiration for Haunted Heart.

Laverne Stewart loves spending time with her husband, their two children, and the family's dog and cat at their lakeside New Brunswick home.