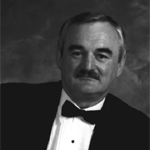 From an early age Ian heard the beat of a different drummer and was always a step or two out of sync with his peers. The third of five children, the novelty of new babies had worn off and he was left to his own devices, developing an independent streak very much obvious to this day.

A true Gemini, he’s always looking for new challenges or exciting pastimes but once the newness wears of, he moves on to something fresh.

At seventeen he started training to become a pilot. Receiving his private license shortly after his nineteenth birthday, he discovered the world was full of Second World War pilots and no work was available for rookies. Losing interest, he left for a walk about in Europe, fl ying only once in the next two years, at Biggin Hill in an antique Tiger Moth. He said it made him feel like the Red Baron.

Returning to Canada after eighteen months of wandering through the British Isles, France, and Italy, he was preparing to visit Australia when he met Sharon. Smitten, he decided she would be his wife, proposing within weeks. She quite sensibly turned him down.

After several months of courting and a dozen more proposals she gave in. Their honeymoon was an eight thousand mile drive to Acapulco Mexico and back in a Studebaker Lark.

Their next forty years have been filled with travel, adventure, successes, and a few failures. Whether it’s walking on the Great Wall of China or driving over a mountain pass in the Swiss Alps during a raging blizzard, Ian believes you keep doing ‘till you drop. Just recently he journeyed to the Mayan ruins at Chichen Itza to view the thousand year old Fall Equinox sunlight shadow show on the great pyramid.

Between jaunts to the Grand Casino of Monaco, Corcavado in Brazil and the opera house in Sydney Australia, Ian has found time to father two children, get elected to Hamilton Ontario’s city council five times and write columns for local newspapers. His political interests have involved him in elections in the Caribbean and Florida, the latter earning him an invite to the inauguration of a U.S. President.

Necessary Larceny, Ian’s first novel, was written while running an automotive import and export business based in Mississauga. His travel takes him to all the places he writes about, and the sequel, well underway, does the same. Now living with wife Sharon in Mississauga, he complains his grandchildren are growing too fast and the printed word is growing too small. Other than these minor irritants, he feels life is good.