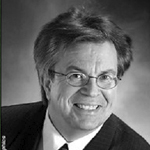 Phil Johnson is a Master of Business Leadership Coach. He was born in Ontario, Canada in 1953.
During Phil’s 25-year career in the semiconductor industry he led several successful companies while travelling throughout North America and the Pacific Rim.

He graduated from McMaster University’s DeGroote School of Business in 1978. He went on to study Electrical Engineering. Corporate roles as Vice President and Director of World Wide Sales were declined so that he could establish the Master of Business Leadership program. Phil and his wife Brenda live in Mississauga, Ontario, Canada.